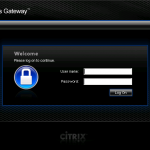 As of the 10.0.71.6014.e release the NetScaler comes with a great UI Customization process. You can read all about this process in this Citrix blogpost.

For the older versions, like the one I run in my homelab (which runs version 10.0.71.6.nc), you can follow the steps described below to change the default theme on your NetScaler.

The described steps are mostly based upon this blogpost from Jarian Gibson that I found, which describes all the performed steps to take in great detail. So all the credits go to Jarian!

To change from the default black theme on the NetScaler AGEE (build 10.0.71.6.nc) to the Receiver (or Green Bubble) theme, you’ll have to perform a couple of actions:

And with these new settings you should have a consistent presentation of the Receiver theme on all the pages your user passes to get from logon page to his (or her) published resources in the application store.