YES!!! It’s that time of the year again. The buzz is zooming loudly. The talk of the town is all about Citrix, great visions, new strategies and great new product announcements.

I’ve locked myself in my room, barricaded the door and keep checking news and live feeds and social media trending topics to join the excitement on the latest announcements, key notes and some in-dept sessions to get a glimpse of what Citrix has in store for us for this year.

So what did I discover yesterday from the buzz so far: 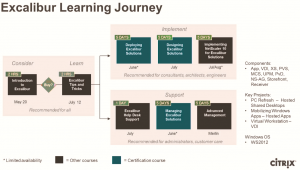 … But more importantly: what would Mark Templeton share with us during today’s keynote?

Hiding in my room did not make me skip my running practice, which unfortunately was planned at the same time as the keynote. So armed with a fully charged phone and earplugs I settled for the next best thing: multi-tasking. Which meant I followed the live feed on my mobile phone, while trying to keep up with all the training exercises. How’s that for making modern technology work for ya and getting all pumped up during the keynote 😉

So here’s a short list of the biggest announcements from the keynote and the corresponding blogs and news articles to provide you with some additional information:

Update: The keynote is online and can be watched on Citrix TV here.

And finally some links to other blogs posted on today’s keynote from the community: